Why every early years child needs an imaginary friend 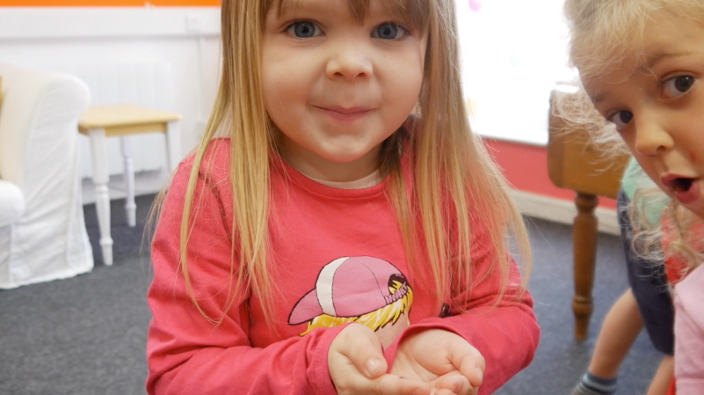 Long gone are the days when parents or teachers worried that a child’s imaginary friend was proof that they had no ‘real’ friends or that they were displaying signs of psychological trauma or social deficiency. It’s now accepted that it is not uncommon, nor in itself worrying, for young children to have an imaginary pal.

But how about actively encouraging them to have one?

The first time I saw a Pyjama Drama class in action, I watched as a highly skilled teacher presented an imaginary caterpillar to a group of children (my then four-year-old son among them). The caterpillar was terrified (shaking in his boots no less), because out in the dark, dank woods lived a witch whose favourite food was caterpillar soup. What were the children to do? How could they help little Sue to turn into a butterfly so she could escape the clutches of the evil witch?

What followed was far more than a lesson in the life cycle of a butterfly. I watched as each and every child began to ‘find’ their own little caterpillar. No-one told them to - it happened naturally, instinctively, in fact. The children were well and truly invested in their new-found friends; determined to keep them safe, feed them up and protect them as they formed their cocoons to eventually break free and flutter away from danger. And as they lined up to leave at the end of the session, every single child cradled their new friend in his or her palm, or eagerly encouraged their butterflies to fly out of the door with them.

It was an absolute joy to watch. The children were developing empathy, practising conflict resolution, experiencing and overcoming tension and fear in a safe and supportive environment, honing their interpersonal skills and problem solving – without realising that they were doing anything of the sort.

I had to learn more, so I went straight to founder Sarah Owen who, luckily for me, happens to be my sister. The teacher who I’d watched deliver the caterpillar session had never worked with children prior to running her franchise and she wasn’t an actress – she had the raw skills and desire to play and pretend with children and this, along with the training and support she had received via my sister and Pyjama Drama, had resulted in an incredibly skilled professional. Sarah and I soon after joined forces and I became a director, helping to support Pyjama Drama franchisees run their businesses around the UK and abroad.

Fast forward seven years, and here I am, having set up Pyjama Drama Learning with my sister and our wonderful colleague, Sarah Rijnen! We help educators to use drama to transform social and emotional learning in their settings. And for children aged 3 – 5, the key to this is what we refer to as ‘secondary characters’, or in other words, imaginary friends.

These secondary characters are the route into harnessing young children’s imaginations, and the vehicle for powerful learning. Why not use a prop, a puppet or toy, for example? Because the character a child creates in his or her imagination is always more compelling. To put it another way, that sparkly dress in your dressing up box? It’s never as sparkly as the one in your imagination. Why limit the possibilities, when a child’s imagination is limitless?

One of the Pyjama Drama Learning resources that I’m most proud of is called, ‘The Way I Feel’. It’s a six-week well-being activity pack for children aged 3 – 5 years, and when the pandemic struck, we decided to give it away for free. Its sole aim is to help pre-schoolers recognise, name and manage their emotions. How do we do this? By introducing a secondary character, an ‘imaginary friend’ – in this case, Gary.

Gary is a teeny, tiny, mixed-up tree frog who’s having a hard time dealing with his big emotions. One minute he’s happy, the next he’s frustrated, he’s angry then he’s excited. With the help of his new-found friends (the children) he learns to recognise his emotions, finds words to express them and uses techniques to help him cope with them. Feeling frustrated? Try taking a deep breath. Feeling confused? Time to find someone to talk to about it. An accompanying original song and music video reinforces these messages.

The success of the activity pack rests on two things: the children’s imagination, and the adult’s ability to ignite that imagination by presenting to them the imaginary Gary in a convincing way, through role play.

I’m a secondary school art teacher by trade, and whilst I don’t mind the odd song on karaoke if the conditions are right, I do not feel comfortable ‘acting’ and I do not want to look a fool. But here’s the thing – I do like reading to my children and putting on the characters’ voices, I do like hearing them laugh when I make their toys talk, and I do like singing songs with my children. Ultimately, if you can do this – and what early years educator can’t? – you can ‘do’ drama with young children.

By seeing Pyjama Drama in action, I learned how to use really simple techniques to build on the skills I already had and make my play time a more powerful learning tool. As educators, we all know how important it is to watch an experienced teacher in action to help improve our own practice. So that’s exactly what this activity pack does – includes videos of an experienced Pyjama Drama teacher in action, demonstrating exactly how to role play with Gary - one video for each of the six activities. They don’t take long to watch, only a couple of minutes each, but they give the adults watching the confidence to bring Gary to life. And as well as the six activities, there are six corresponding extensions.

This pack is for anyone who works with young children, no matter their job role, their previous training or education, or what kind of setting they work in. It can be used to compliment distance learning either by educators themselves delivering the role plays, or by sharing the resource directly with parents. You can sign up to access the pack here for free on our learning hub, but if you do nothing else, take a look at this, the first of the demo videos. Why not try introducing Gary to some children – I guarantee there’ll be more than one tree frog in the room in no time at all. Then head over to the learning hub to access the rest of the pack where you’ll find our original song (sung by my now eleven-year-old son!), the music video, six demonstration videos and the downloadable resource pack itself.

As our early years children are faced with continuing lockdown it’s easy to see why now, more than ever, igniting imaginations is crucial not only for them to help make sense of the world around them, but to experience the world in a way that they aren’t currently able to. And once you’ve brought Gary to life by copying the first demo, you’re one step closer to using this character to help unlock learning potential, and the pack is carefully structured to help you do just that.

These little frogs will help your early years children to understand about their emotions, to recognise them and increasingly be able to name them and take steps to deal with them. What’s more, they’ll be developing skills right across the Prime Areas of Learning. Social and emotional intelligence is the foundation for engaged, active learners who grow into engaged and active members of our society. And it can all start with one little mixed-up frog…