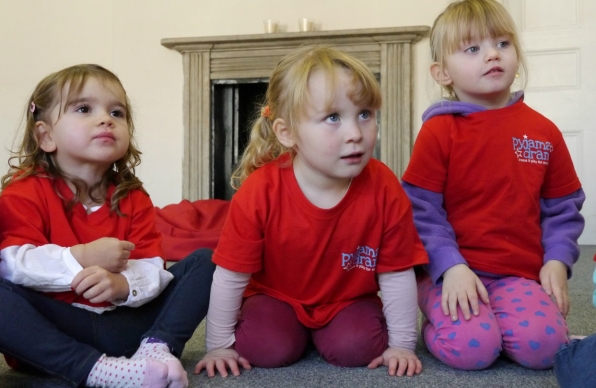 Anyone can tell a story!

This week is National Storytelling Week meaning that all around the UK in libraries, pubs, theatres, schools and a whole assortment of other public places, people will be telling stories; old, new, forgotten and re-found. What’s really interesting is the emphasis on telling, not reading stories; something that we at Pyjama Drama feel is really worth shouting about. Storytelling is drama, although it requires no costume or props it does require the creative use of facial expression, voice, gesture and eye contact. Perhaps more importantly, the most powerful stories (like the most powerful drama) comes from within and has a true connection with the storyteller themselves.

What’s so fantastic about storytelling is that anyone can do it, and I mean anyone. Shy or confident, old or young, as long as you chose your audience and play to your strengths, anyone can be a storyteller and a good one!  My 87 year old granddad can keep the family enthralled for hours with his stories of his time in the parachute regiment and (setting aside his obvious talent for bringing the past to life through his characterful expressions and use of language) he’s on to a winner from the start – his family are the perfect audience and he plays to his strengths - namely his amazing memory for detail (my own memory got lost somewhere about the time I gave birth to my first child, so I just shut up and listen at these family gatherings). My brother in law makes up fantastic stories for his son about Thomas, Edward and Rosie (from the amazingly successful Thomas the Tank Engine series) with nothing more than a couple of plastic trains on the bedroom floor. Again, this isn’t my forte - although the audience may be right, I can't get excited about trains going round and round a track. Ultimately, really useful engines just aren’t my thing.

And that’s the point. If you find a story that you can connect with and have an audience who will appreciate it, there’s nothing to stop anyone being really great at telling stories. So, if you’re not already doing it, why not give it a go? And if your audience is under five years old, you’ll be amazed at the impact, honestly. A few years ago, sick to the teeth of reading the same old bedtime stories to my preschool child, I once told a story about a girl called Susan who turned into a fried egg. While my story telling skills may not compete with those that are sure to be showcased around the country this week, I can say with some pride that ‘Fried Egg Susan’ is a story I still get asked for nearly eight years on…

Join in with, or find out more about National Storytelling Week here.